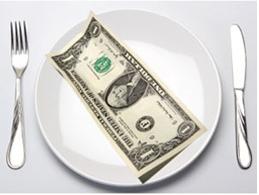 I know I've written in the past about how easy it is to do everything with a discount nowadays, especially with group buying sites, but sometimes I still can't get over what an effect these changes have had.  I know I have probably felt these changes more than some other people due to my slightly obsessive deal-finding nature (which has only gotten worse since I started this blog), but it still surprises me.  Two years ago, I rarely, if ever, received discounts at restaurants.  The only thing I would check out beforehand was the menu and the reviews for the restaurant.  Now, if I decide I want to try a new restaurant out, I'll first do a quick search to see if I can get a discount.  Or other times, when trying to decide where I want to go for dinner, I'll go through the deals that I've accumulated and see if any of those appeal to me.  Of course, I don't always get a discount when I dine, but I would venture to guess that lately I get some sort of deal about 30% of the time.  And, I have to say, I like it!

Tonight, thanks to Blackboard Eats, I'm trying out Da Silvano, an Italian restaurant in the village that I've been meaning to try for years.  With BBE's deal, I will get a free bottle of wine as well as an appetizer.  And it only cost me $1 to get this deal.  Definitely a nice incentive to finally try a restaurant I had been wanting to visit for a while.

And then there's Sprig, a restaurant that recently opened a few doors down from my apartment, in the Lipstick Building's lobby. I had been curious about it, but it's a little pricey, and I wasn't curious enough.  I also noticed that the restaurant was never more than half full (thanks to its wall of windows!) and knew that it was inevitable that they'd participate in at least one of the restaurant deal sites.  Well, I was right!  In my inbox this morning was a Groupon for a $50 voucher for $25.  So, it looks like I'll be trying Sprig soon!  (And as extra incentive, I recently realized that Groupon is on Ebates, so I will get an additional 3% back (that's a whole 75 cents... awesome!).

I can't wait to see what other great restaurants will come on board the discount dining bandwagon!

Other Great Links and Discount Sites