AHHHHHH!  Only a few days after I finally decide to spring for some Ippolita bangles at Saks, and moments after I mention in my last post how I bought them, I receive an email from Rue La La informing me that there's an Ippolita sale today!  So against my better judgment, I take a look, and the prices are fantastic.  The selection is pretty great too.  I had only bought 2 bracelets at Saks, with the intention of adding on later, but this is soooo tempting!  On the other hand, I'm still faced with the same problem of alterations-- these are the standard Ippolita size, which means I'd have to go to a jeweler to get it fixed.  And I have NO idea how much that would cost.  As you can see below, this wouldn't be an easy adjustment.  Ok, I'm going to stew a little and try to make a decision.  Hopefully no one buys this bracelet while I'm wondering.  And for those of you who don't have my problems but love Ippolita, go buy some jewelry at Rue La La NOW!

For tomorrow only, Alexis Bittar is (a little prematurely) celebrating Halloween by offering at 15% discount on all items online and in store.  As you can see from their flyer below, if you go one of to their stores (in the West Village, Soho, or UES) tomorrow evening, you'll also be treated to cocktails and candy!  To use the discount online, just enter the promo code "HALLOWEEN" at checkout.  If I hadn't just splurged on my long-desired Ippolita bangles (which I'll tell you about soon), I'd be very tempted to take advantage!

I came across two great deals for jeans (and other clothing too, I guess) for your enjoyment today.  You may have noticed that I tend to gravitate towards deals where you get a certificate or credit rather than an actual item.  This is because you know exactly what you're getting, and don't need to worry about sizing, fit, etc.

So the first deal is not really a new one.  I've seen it (and written about it) a few times before.  It's a $165 credit to National Jean Company for just $75 on Rue La La.  The credit is valid until January 26, 2012.  This amounts to approximately a 55% discount.  See my prior posts on details about National Jean Company if you're unfamiliar with the store.  But in a nutshell, I'd definitely recommend purchasing this deal (or I wouldn't keep writing about it)!


The second deal is courtesy of Pop Sugar and is a $250 credit at J Brand for $125.  Unfortunately, the credit is only good at their online store, www.jbrandjeans.com, but it's still a great deal, especially if you're a fan of this premium denim line.  The credit is only valid through December 24, 2011, but I'm sure you won't have a problem finding something great to purchase by then!
Posted by Tara at 10:44 AM 2 comments:

In case there aren't enough sales/discounts out there for you (and you want to support a good cause!)... 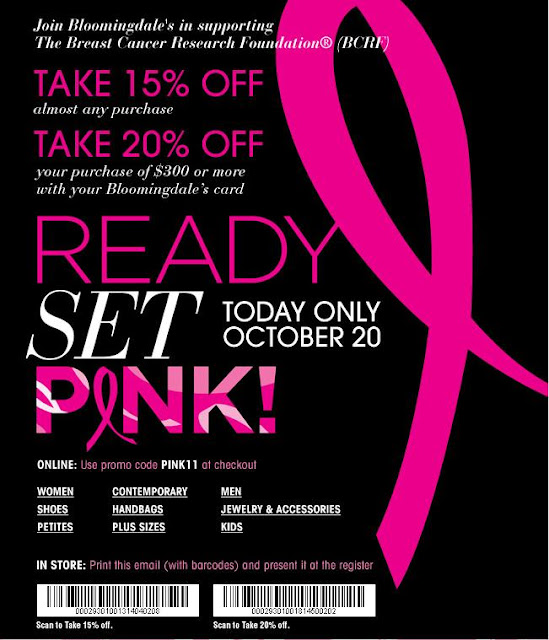 FYI, it's not clear exactly how/what Bloomingdale's plans to contribute to breast cancer research, but I have to assume it's something, right?  And something is better than nothing!  Also, they have another breast cancer promotion in which they're more transparent:


You'll be mailed a Give Pink, Get More Card worth up to $250 just in time for holiday shopping in December. Use at any Bloomingdale's store and at bloomingdales.com.
Posted by Tara at 11:09 AM 3 comments:

So I know the Saks F&F sale is about to start (and already has started online), but if you don't want to wait to go in store, and don't want to pay for shipping from Saks, then the Shopbop friends and family sale is for you!  Today is the last day of the sale (don't be too mad at me though, it's only a 2 day sale!).  But how much time do you need to click a few times and have your purchases on your way?  As you know, Shopbop has a very extensive inventory and there doesn't seem to be many restrictions from the sale.  Plus Shopbop offers free return shipping, so if you're hesitant about buying clothing online, there's really no risk.  Lastly, to sweeten the deal, Shopbop participates in Ebates (and you know how I love Ebates).  So if you go through Ebates, you will get an additional 2.5% back (I know, I know, it's not a lot of money, but it's still more money in your pocket when all is said and done!).

Yay!  I think the title of this post is pretty self-explanatory (and if it's not, check out the flyer below).  The sale starts today online, and on Thursday (Oct. 20) in stores. It runs through October 23.  Of course you can go to the store now and buy things through its pre-sale.  Twenty percent off most items, 15% off jewelry, but of course there are designer exclusions (and cosmetics are excluded as well).  However, I have to give Saks extra points because unlike Bloomingdale's, Ippolita is NOT excluded.  I think this means I'm finally going to get my bracelets (and stop boring you all with my little obsession)!  Check the flyer below for details. 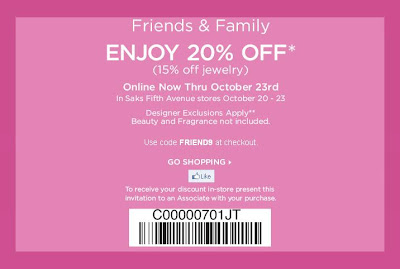 The Better Deal-Club A Steakhouse

Today's Better Deal is for Club A Steakhouse in Midtown East.  This morning I received an email from Blackboard Eats with a deal for a three course prix fixe meal plus sides and a glass of wine for $45.  The best part?  As you know, with Blackboard Eats, you don't have to pay for the deal, so there's no obligation to use it.  The deal included an app, entree, side, dessert, and glass of wine.  And it's not a dinky prix fixe menu either-- there are 7 possible entree selections, including a 10 oz. filet, plus 6 app choices, 4 sides, and 2 desserts.  So I grabbed this deal.  I think I'll try to take advantage of it before it expires in November, but if not, no loss.  And I don't have to stress about trying to find a time to go and losing my money if I can't.
However, shortly after signing up for the Blackboard deal, I received an email from Living Social offering a similar deal at Club A Steakhouse, except it cost $69 for two people, and you have to pay up front.  And it doesn't include a glass of wine. So for a party of 2, there's a $21 price differential, but you could argue that the 2 glasses of wine would easily cost $21.  But what if you don't want wine?  Well if you do, it's an easy decision.  Blackboard!  If you don't, then you need to decide if you care enough about going to this restaurant to commit your money.  The other thing to take into consideration is that the Living Social deal doesn't expire until May 2012, which I guess is a pretty big advantage if you can't make it before November 13 (when the BBE deal expires).
I'm a bit of a commitment-phobe when it comes to buying deals for restaurants, unless it's somewhere I've been dying to go.  So I think I'll stick with BBE for this one.  But if you know for sure that you're going to be hitting Club A, I'd totally recommend the Living Social deal!
Posted by Tara at 2:12 PM 1 comment:

So the Bloomie's F&F sale is over, and the Saks sale doesn't start until Monday (more details on that to come).  What are you supposed to do in the interim?  Shop the Diane von Furstenberg Friends and Family Sale, of course!  The sale is good for all merchandise online at dvf.com, with the code "FALL20" used at checkout.  The flyer states that the discount is also good in stores.  There's no end date, which is kind of sketchy-- it says that this "offer [is] valid while supplies last."  I don't really get that--since supposedly everything is included, does that mean that the sale is only over when the entire stock has been depleted?  I doubt that.  If anyone can shed some light on this mystery, it would be much appreciated.  However, my advice would be to buy sooner rather than later to ensure you'll get the discount.  Happy friends and family season!

I know that over a month ago I promised you that I was back and that I'd be writing regularly, and then you didn't hear from me again until now. For that I apologize- I have no excuse. But I will try harder to keep my promises from here on out. And in case you were worrying, just because I haven't been writing about deals doesn't mean I haven't out scouting and utilizing new deals! In fact, since we last spoke I have been busy scoring discounts on clothing, dining, and even hotels! I'll tell you about all if that, but today I wanted to brag about my mini-success at the Bloomingdale's friends and family sale, which ends today (so if you haven't gone yet, today is your last chance!).

Overall, sometimes I think the F&F sale isn't worth the hassle- Bloomie's gets insanely crowded and there are a lot of designer exclusions. However, who am I to turn my nose up at 20 percent? The real deals are found when you score something that's already been reduced. Since I only went yesterday, the penultimate day of the sale, the sale selection was pretty meager (I assume there was much more at the beginning, but I could be wrong). I did spot that Rebecca Taylor dress I had been lusting after, discounted to $241 (less 30 percent and less the F&F discount). I was pretty peeved that they didn't have my size and spent 15 minutes unsuccessfully trying to convince myself that the next size up looked good on me (it didn't). However, I did spot a cute Nanette Lepore dress, which was originally $298.  After discounts, I figured the dress would come out to about $100, which I was pretty stoked about. When it rang up at $53, I was thrilled. Now, discounts this steep don't come with current fall merchandise; this dress is unmistakably a summer dress (unlike the Rebecca Taylor, which I think can be camouflaged for fall). But at $53, it's definitely worth it, and now I have a new dress to bring on my trip to Costa Rica in December, so thank you Bloomingdales!*


*NB-- I had especially been looking forward to this sale because I had planned on finally purchasing the Ippolita bracelets I had obsessed over mentioned this summer. Unfortunately, Ippolita was excluded from this sale, but I'm still hopeful that the Saks sale will include it, as it did last year.
Posted by Tara at 1:17 PM No comments:

Other Great Links and Discount Sites